On the 21/01/2020, on a lovely sunny morning, Clive and I took a walk up the Rife and on to the East Preston/Ferring Gap. Highlight was a Water Rail just north of the road bridge. On the gap were at least 8 Skylark and 12 plus Pied Wagtail’ There were a few small groups of Greenfinch and 2 Stock Dove at east Kingston. No Kingfisher or Grey Wagtail but these were seen on Christmas Day. Two  Herons, 3 Little Egret, Kestrel and Buzzard have been fairly regular in thre Rife area.

There was a good passage of Swallows, House Martins and Meadow Pipits totaling well over a thousand birds moving west along the coast and over the fields at Goring Gap on Monday September 30th on what was one of the calmer mornings of the period. A group of four Wheatears appeared later on the beach there, two of them showing features of the larger ‘Greenland’ race.

Whilst counting butterflies in the lagoons west of the Rife, a Wasp Spider was spotted. This uncommon, introduced species mimics wasps with its black and yellow striped abdomen thus avoiding predators. It builds an orb web with a decoration called the stabilimentum in the centre which may attract its prey. The female is large, 15mm, but the male is an insignificant brown and only 4.5mm. It tries to creep in and mate with the female without being eaten. He waits until her final moult and rushes in while her jaws, or chelicerae, are still soft so hopefully avoiding cannibalism. Some males actually stop further males from mating by ‘plugging’ the female with their own body! There’s dedication for you!

Found in southern England, Europe, North Africa and Asia and even some eastern USA states, the Wasp Spider appears to be extending its range.

Make it easy for them to come in by making holes in/gaps under fences. If you have hedges, avoid having chicken wire barriers in them. They need holes of approx 15cm/6in diameter. They can climb, but are unlikely to scale a 6 foot fence.

Have water available in your garden for them (and all other wildlife) to drink. If you have a pond, give them an escape ramp of some sort, they can swim but are not able to do so indefinitely.

If you want to feed them, don’t leave bread and milk for them, as this is actually bad for their tummies. Dog or cat food is better, left out overnight. Apparently they like chicken flavour,  but avoid all fish. They will eat unsalted peanuts and apparently some cheese. The risk of dog/cat food is that you will simply be feeding foxes (and possibly dogs and cats). It is possible to buy dried foods (eg Spike’s and Ark wildlife) specifically for hedgehogs which should avoid this problem (eg Shoreline pets in the Mulberry parade, Goring stock some).

For hibernating, a loose woodpile is ideal, but you can either buy hedgehog houses, or make one. The basic requirement is a dry chamber, with an entrance tunnel approx 13cm dia, long enough to prevent a fox from reaching into the chamber. Ideally the tunnel should slope down slightly from the chamber, to prevent water running in. The chamber should be covered with a waterproof material, and preferably then covered in earth or vegetation, and a supply of suitable bedding material such as straw and leaves nearby is useful. The home should be in a quiet, cool, shady spot, with the entrance facing away from cold winds (not North or Northeast). An old plastic milk crate with the internal partitions removed is suitable. If making one of wood, avoid material which is treated with preservatives, other than water-based. Approx 30 x 30 x 40cm/15 x 15 x 19 in. internal size. Avoid disturbing it if there is a resident!, one way to check in the Spring is to put a light obstruction over the entrance and see if it is pushed out of the way overnight. In the summer it is a good idea to clean it out, an organic pyrethrum powder suitable for caged birds is ok.

For further information, do have a look at an excellent website – www.hedgehogstreet.org

Recent storms have pushed the shingle into a steep bank high up on our beach. At low tide it appears that even more sand has disappeared.
This is a good time, however, for a beach comb. A lobster was found today together with a good variety of seaweeds and also shells and egg cases. Take a stroll along the tide line and report any interesting finds.
Tricia 01/12/2015 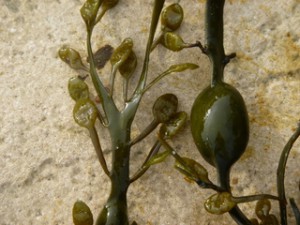 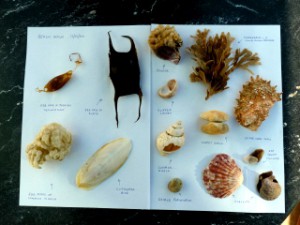 Things to look for