Go to Nature Notes for Tricia’s frequent posts. There are recent sightings and suggestions for things to do and look at in your garden and when walking around the village and over the Gaps and up to Highdown. Please report to her any interesting sightings of your own.

We know that many of our members will miss their usual visit to Highdown Gardens this Spring so please click on the video below and enjoy a short virtual tour of these beautiful Gardens that we are so fortunate to have on our doorstep.

Virtual Tour of Worthing's world famous Highdown Gardens 🌸Our beautiful chalk gardens on Downland countryside, overlooking the sea, are bursting with life and are a spectrum of colour.Although we're currently not able to see the rare plants first hand, our gardeners have been snapping away to ensure we have a wonderful collection of springtime photos to share with you at this difficult time.Put on your headphones, find a quiet place and take a few minutes to escape with our video below…

Posted by Highdown Gardens on Friday, 1 May 2020

Due to the ongoing Coronavirus situation, we have had to cancel the planned beach clean on Saturday 16 May and the next members’ meeting on Friday 29 May. We continue to keep our future meetings and activities under regular review, but will of course abide by Government regulations and advice. Any updates on our activities will be posted here as well as in our regular e mails to members.

Please see below a wonderful video of Arundel Castle Gardens with the tulips in bloom:

We seem to be moving out of lockdown into ‘alertness’, which means more freedom to go out – keeping the 2 metres ‘social distance’, or wearing masks where we cannot do that, and that more shops will be opening soon, beginning with Garden Centres. I know that many Conservation Group members have been helping their friends and neighbours with shopping and other essentials, and it may be necessary to keep this up for a few more weeks at least. As before, if you know of anyone who needs help but not getting it please let me know – EdMiller43@msn.com

During these unparalleled times it is reassuring to observe that nature continues to thrive all around us.

Please see our Nature Notes page for up to date observations and suggestions from the Group’s wildlife expert, Tricia Hall. 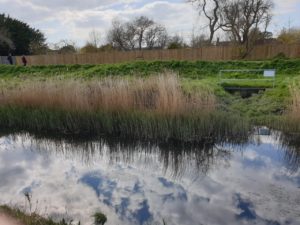 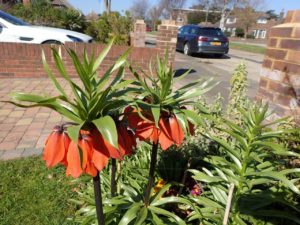 A member writes: It has been glorious the last few days on Highdown, with views from the Isle of Wight to the Windfarm and Brighton. On a very clear day it is possible to see Portsmouth’s Spinnaker Tower but only at a height from horseback, The Cathedral is easier to pick out. The mass exercising of dogs has ceased and most walkers are behaving. Skylarks are common both high up and when canoodling on the ground. There are several rafts of molehills. On the chalk slopes crows and jackdaws abound with isolated pied wagtails and a redwing in flight. A few goldfinches are around and we are waiting for swallows to return to their old nests in the stables. The badgers’ set along the ridge to Angmering has collapsed and they may have transferred to a second old set near the bottom of Hangleton Lane. Blackthorn for sloe berries and gin later is brilliant. Cow parsley abounds, the first time for years that it has been apparent throughout a winter.

If you walk up the lane, the first field on the right houses two huge hunters, Captain is in retirement and Duke is too difficult to ride. Please don’t feed them, some have tried as shown by carrots thrown into the field.’
So, all nature looks good and as it should be. However, there is something wrong down below; fewer trains, much less traffic on the 259, Honda and Peugeot are sleeping, no jets powering down approaching Gatwick.
……And David Bettiss points us to the web camera on the Peregrine’s nest on the roof of Chichester Cathedral:  chichesterperegrines.co.uk

A member writes from Hangleton Lane: ‘Wild life revives: we have seen here apart from the resident blue and coal tits doves and pigeons, a fox, a moorhen, three ducks, a heron, a pheasant, and one small rabbit .What a difference it makes when Yeoman’s shuts down!’
Another, writes from off Langbury Lane, ‘We have the usual bird feeders, with anti-squirrel cages, but also a stick-on feeder for the window.  This allows the less dexterous and bigger birds to obtain food just by landing on the open feeding area.  Now they are all busily nesting, all the feeders are getting hammered and will get even more so once the chicks hatch.  Now we all have more time at home, we can spend some of it allowing our feathered friends to entertain us.  Seeing 15 starlings all challenging each other to get to the window feeder, I seriously wonder if any of them get anything.  The savvy blackbirds wait underneath and pick up all the dropped seeds, etc.  We have found the suet pellets with fruit or worm bits are scoffed by nearly all with sunflower hearts being almost universally rejected.  The shallow water bowls nearly are also heavily used for bathing and drinking so it is a regular daily job to keep everything in order.  The window bird feeders can be bought on Amazon as indeed can a huge variety of bird food and could provide an worthwhile diversion for people who are stuck at home, perhaps on their own. 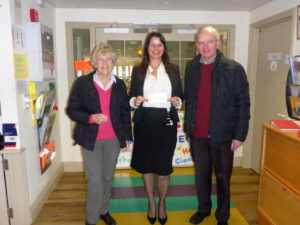 Christmas Cards. The cards have been sold on behalf of Ferring Conservation Group exclusively to raise funds for the Hospice. The Group are delighted to have supported Chestnut Tree House over the last 8 years with many  thousands of pounds raised in this way.