Ferring Conservation Group was delighted when Chris Horlock stepped in at very short notice to speak at their monthly Group meeting on 27th May. With an illustrated talk entitled ‘A Sussex Scrapbook’ Chris regaled members with an enchanting mix of anecdotes regarding famous people with a connection to Sussex, details of local historic buildings and landmarks, local traditions and folklore as well as traditional ‘health cures’, legends, tales and mysteries. Chris cleverly linked these stories to paint a vivid picture of the attitudes, beliefs and outlooks of the generations that lived in our cherished county in years gone by. As a much respected local historian Chris contributes regularly to Sussex Life and is the author of several books on Sussex history. As a natural story teller Chris has graced the airways on radio and has also appeared on television. Chris began his talk with interesting details of the Priest House at West Hoathly on the edge of the Ashdown Forest. It was once owned by Henry VIII and now has over 170 culinary, medicinal and household herbs planted in the garden. There are witch marks scratched into wood in several places in the house including the front door and on the beam above the main fireplace. These are known as apotropaic marks dating back to the 17th century and were believed to prevent witches from entering the house. Set into the ground outside the front door is a rough slab of iron which is waste from a local furnace and this was also believed to serve the same purpose (witches were commonly believed to be scared of iron).

The Long Man of Wilmington was the basis of another of Chris’s many stories. This giant figure is 235 feet (72 metres) tall and stands proudly on the steep slopes of Windover Hill near Wilmington, East Sussex. The origins of the Long Man are unclear and it was once thought to have been from Neolithic times but it could be as late as the 16th or 17th century AD. From a distance the figure seems to have been carved from the underlying chalk but the modern figure is formed from white-painted breeze blocks and lime mortar. With many other facts and stories relayed to his captivated audience Chris brought his talk to a conclusion by raising a chuckle with the photograph of a sign seen on the front gate of a Sussex property: ‘Trespassers will be Composted!’ 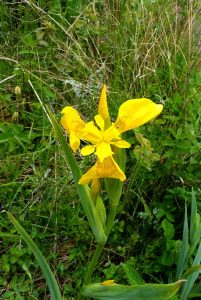 members on local wildlife sightings and happenings. Graham paid tribute to Tricia Hall who had devised and presented this slot for the past eight years and acknowledged that he indeed had big shoes to fill. Graham began by showing a photograph of the shingle beds along Patterson’s Walk, which Tricia regularly tended, along with the boat at the top of Sea Lane which was looking pretty with many Red and White Valerian. Also the lagoons had many Yellow Flag Irises and along the banks of the Rife Marsh Orchids and Twayblades (an easily overlooked orchid recognisable by their two large leaves and yellow/green flowers) were thriving. There have been several types of orchids seen in the vicinity including Bee Orchids. Three

Painted Lady butterflies (a migrant butterfly from Morocco) were seen during the recent Beach Clean (at which very little litter was reported). Graham was delighted to inform members that masses of tadpoles were seen around the footbridge area of the Rife and Clive Hope reported having seen three Bee-eater birds over Angmering.

Ed Miller concluded the meeting announcing that there had been no further planning news with the exception that Worthing BC had received consent for a Judicial Review into HM Planning Inspector’s decision to allow the Chatsmore Farm planning application.