A perfect summer day greeted 16 enthusiastic members of Ferring Conservation Group when they met in the car park at Highdown Hill for a morning walk to enjoy the colourful blooms of summer and see birds and butterflies on the wing that frequent this stunning area of the South Downs.

Even whilst waiting for the Group to assemble, members were treated to the sight of a solitary Buzzard testing the thermals who was soon joined at a distance by three Red Kites whose strikingly marked wings made them easy to identify. Also a Sparrowhawk carrying its pre 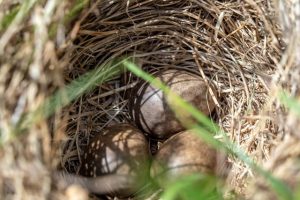 y put in an appearance in the clear blue sky.

With Tricia Hall leading the Group with help from several other knowledgeable members they set off up the hill along a path edged with long grasses that proved an ideal habitat for many species of wildlife. A Large Emperor Dragonfly was the first to be spotted and as a noisy Wren called out from a nearby tree, and Crickets clicked away in the long grass, the first of many Meadow Brown butterflies was seen along with a Brown Skipper and an unidentified day-flying moth. 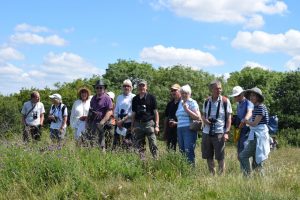 Amongst the pretty long grasses the yellow Meadow Vetchling was evident along with a few Pyramidal orchids, purple Tufted Vetch and the pinkish white flowers of the Yarrow. A Thick-kneed beetle and a Common Soldier beetle were spotted in the vicinity and a Cinnabar moth.

On reaching the top of Highdown Hill Tricia led the Group down along the north side of a meadow where Red and White Clover and Goat’s Beard (also known as ‘Jack goes to bed at noon’ so named as its flowers always close by midday) were interspersed with many more Pyramidal orchids which had attracted many Bees. Wild Thyme could be seen in a hollow at the side of the meadow and also nearby were the yellow spikes of the Wild Mignonette, while the creamy white flowers with fluffy underlying sepals of Old Man’s Beard were plentiful in the Hawthorn bushes that edged the meadow.

As the Group headed back to the top of Highdown Hill once again, Clive Hall pointed out a Yellow Hammer perched on a nearby bush which gave keen photographers an excellent opportunity for a close up photograph. 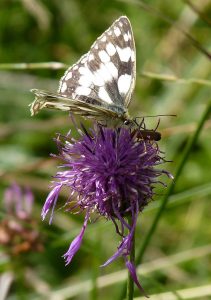 The long grassland in this area is the perfect nesting site for the Skylark and the Group were soon rewarded when Graham Tuppen came across an intricately made nest containing three brownish coloured eggs laid by this pretty bird. This was duly photographed taking great care not to disturb the area where it was discovered. As several Swallows flew overhead the Group were left in no doubt that summer had indeed arrived.

Altogether 11 butterfly species were identified and Tricia commented that “it was wonderful to see hundreds of Marbled Whites and Meadow Browns and also good to see a Ringlet, the first seen in the Ferring area for a while”.

As Tricia led the Group through the meadow below Highdown Gardens, beautiful Meadow Cranesbill, pink Musk Mallow, Field Scabious and Chicory were in full bloom also the frothy yellow flowers of Lady’s Bedstraw scented the air with honey and when dried these flowers have the scent of new mown-hay. Its name is probably derived for the tradition of stuffing straw mattresses with it, particularly those of women about to give birth.

At the end of the walk as they neared Highdown Tea Rooms, looking forward to welcome refreshments, a magnificent male Stag Beetle was found displaying its impressive mandibles (these appear as large pincers used to crush prey).

The walkers thanked Tricia for imparting her considerable knowledge and opening their eyes to all the amazing wildlife that this wonderful area has to offer, and all agreed that ‘it was rather a good morning’.