Meeting in the Bluebird Café car park at the southern end of the Rife, 11 enthusiastic  members of Ferring Conservation Group split themselves into two groups and set off along the west bank to endeavour to count as many butterflies and moths as they could find. Tricia Hall gave out lists for members to cross off together with sheets of 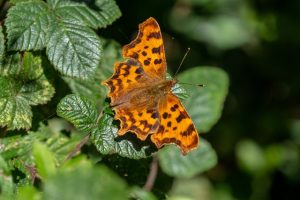 photographs to help with identification. The two Groups were hoping to see the sun come out to warm the air as this encourages butterflies to immerge from their resting places.

Jointly the two groups found nine different species with a total of 54 individuals in the south lagoon and 43 in the north lagoon. There were 58 Gatekeepers, over half the total found. There were only 3 Common Blues but this included a fresh female. Only one Red Admiral was seen and no Peacocks or Small Tortoiseshells. A limited number of Large and Small Whites and Speckled Wood 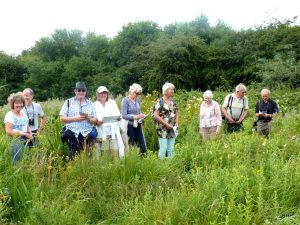 butterflies were counted and the commonest day-flying moth was a Shaded Broad-Bar.

The results of all the butterflies and moths found have been added to the Butterfly Conservation ‘Big Butterfly Count’ survey. This nationwide survey is helping to assess the health of our environment as butterflies react very quickly to change which makes them excellent biodiversity indicators.  It was launched in 2010 and has rapidly become the world’s largest survey of butterflies with over 100,000 people taking part in 2018.

Tricia commented that “more species may have been seen if the sun had come out”, as 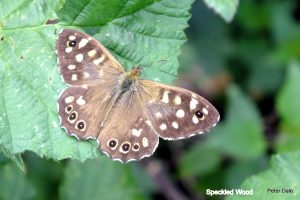 the lagoons are a mass of flowers at present, possibly benefitting from recent rain which should have provided ideal conditions. The only dragonflies seen were the reddish Common Darter, a bright blue Emperor male and an extremely tatty old female Emperor with terribly torn wings.

The highlight for one group was an uncommon Wasp Spider in a damp area of the north lagoon found by Graham Tuppen, one of the Group’s ultra-alert participants. This introduced species has a bright yellow and black abdomen to mimic wasps and thus avoid predators.