On a cold but sunny morning around 30 members of Ferring Conservation Group met at St Mary the Virgin Parish Church at Clapham in search of bluebells and other wild flowers. This flint stone church has stood firm since the 13th century and made a picturesque start as we set out towards the woods.  Our route led us over several stiles, some of which proved to be a challenge but worth the effort as we entered the wood and caught a first glimpse of the abundant bluebells. 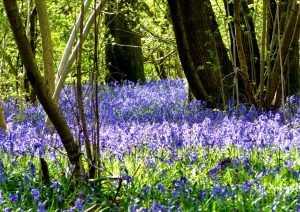 These delicate native flowers do not welcome change or disturbance and prefer ancient woods that have lain undisturbed for years. Around 300 hundred years ago Spanish bluebells were introduced into gardens but these soon spread and began to hybridise with native plants to produce tougher varieties with dominant genes. The main visual difference between the varieties is that the native bluebells are slightly smaller, have narrow leaves, a violet bell-shaped flower, drooping heads and a delicate fragrance. The Spanish bluebells are wider leaved, stand erect and have no scent. Their flowers have less of a bell and are more of a ‘hyacinth’ blue. Bluebells have not traditionally been used medicinally but researchers are now looking into their highly effective animal and insect repellent properties, and there are even possibilities that certain bluebell extracts could be used to combat HIV and cancer. 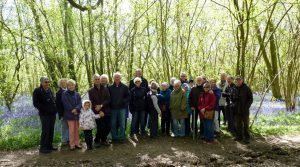 Glorious carpets of bluebells were evident as we strolled along the woodland paths and although their scent was not witnessed at the start of our walk, as the temperature gradually rose their delicate perfume filled the air. Many other wild flowers were present and we eagerly ticked them off on our list of likely sightings. These included red campion, celandines, greater stitchwort, ground ivy, wood anemones, goldilocks buttercups, primroses, early purple orchids, bugle, wild strawberries, wood sorrel and violets. Along the way we caught a glimpse of a red kite soaring high above us through a clearing in the trees, and we could plainly hear an enthusiastic woodpecker on a nearby tree and the cheerful singing of a chaffinch accompanied by the regular rhythm of the song from a chiff chaff.

As we neared the edge of the wood we had a wonderful view of the Downs towards Black Patch Hill, this area has, what is likely to be, one of the most important Stone Age settlements found so far in Southern England. The area to the north-west of Clapham is one of the largest in West Sussex without any public roads. This is mostly due to the efforts of successive Dukes of Norfolk, who owned the land. The Angmering Park Estate which was created after the death of the 16th Duke of Norfolk in 1975, will hopefully keep things this way for many years to come.

There has been a settlement at Clapham since at least the Saxon times and as we turned and headed back towards our starting point we noticed signs of the age-old skill of coppicing and other woodland industries, still practised in the area. We had almost reached the end of our walk when we had our final treat of the day when discovering a quintessential English scene of a field of horses and sheep surrounded by woodland trees with St Mary the Virgin Church to the east and a sea view in the distance. After thanking Graham Tuppen, our knowledgeable guide for the day, we headed to the local café for a well-earned lunch.