Conservation’s ‘Big Butterfly Count’, and 2022 was no exception. This important survey is aimed at helping conservationists establish the health of our environment by counting the amount and type of butterflies (and some day-flying moths) sighted throughout the UK.

Unfortunately the balmy, sunny day that encourages butterflies to take to the wing was not to be. Instead a dull and windy day greeted an enthusiastic group as

they met in the carpark at Highdown Hill, although consequently their expectations were limited. As the group, led by Graham Tuppen ably assisted by Clive Hall and Peter and Ruth Dale, proceeded to the top of the hill following a path that was edged with large hawthorn and elder bushes, they were rewarded with the sight of a few Meadow Browns and Gatekeepers. It was reassuring to note a healthy Ash tree standing proud in the vicinity and as the group ventured further along the brow of the hill some Common Blues were seen plus a solitary Painted Lady and a Small Skipper. Heading eastwards a beautiful Silver-washed fritillary was spied 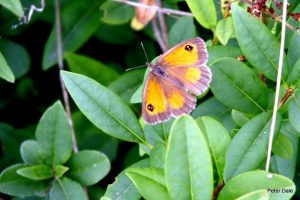 by Clive Hall which rested just long enough for the rest of the party to also be enthralled by its beauty and was definitely a highlight of the morning.

Other welcome sightings were many wildflowers including a Round-headed Rampion, as well as Knapweed, Red Bartsia, Yellow Rattle, Agrimony (this plant is also known as ‘Church Steeple’ because of the shape of its spikes – all aerial parts of Agrimony emit sweet scent when they are crushed and due to the pleasant, apricot-like smell of the flowers it is often used for the preparation of potpourris). Along with Wild Carrot and Parsnip, the frothy yellow flowers of Ladies Bedstraw were evident and on a warm day these flowers fill the air with a sweet, honey-like scent.

As a firm reminder that many species of wildlife also share the wonderful habitat that the Southdown National Park provides, Swifts and a lone Skylark flew high above Highdown Hill while the familiar drilling sound of a Woodpecker could be distinctly heard. Heading through a partially wooded area on the lower slopes, a charm of striking Goldfinches flashed past (a ‘charm’ is the collective name for this particular bird). The climax to this interesting day came when Graham Tuppen observed, what he first thought was a small bird, but was in fact a Hummingbird Hawk Moth hovering around a Buddleia bush near to Highdown Tea Rooms (this day-flying moth has a wingspan of about two inches and uses its long proboscis to feed on the

nectar of tube-shaped flowers and is named for its similarity to Hummingbirds). This was a first sighting in the wild for Graham and he was suitably impressed.

To celebrate this unexpectedly successful morning several members of the Group partook in refreshments at the popular Tea Rooms before heading home to submit their sightings into the Butterfly Conservation’s national database.