With ideal weather conditions on our side members of Ferring Conservation Group met at Michelgrove Lane on the Angmering Park Estate, in the hope of seeing a variety of bird life.  We were not disappointed. This private estate extends to over 6,750 acres and is owned by the Trustees of the late Bernard, 16th Duke of Norfolk with its origins going back to the Norman Conquest.

As we made our way along the lane towards Harrow Hill, pausing to hear the distinctive call of Pheasants, we sighted both male and females foraging in fields along with Jackdaws and Ravens. As a Great Spotted Woodpecker flew past we noticed Hazel catkins, Blackthorn berries, commonly known as Sloe, wild Rose-hips 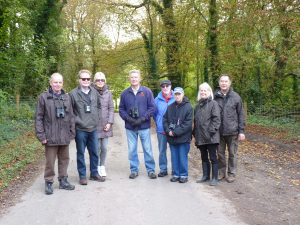 , Field Maple, Dogwood and Ash lining the edges of the lane. Walking further up the Downs a Buzzard could be heard calling and then appeared on the horizon pursued by two Crows. A shrill call alerted us to a Skylark perched on telephone wires, a Corn Bunting, several Meadow Pipits, a Chaffinch and a Song Thrush were also seen in the vicinity.

After negotiating two stiles and a particularly slippery footpath, Black Patch Hill came into view and Common Gulls, Partridge, including Red-legged Partridge, Stock Doves and Woodpigeon were seen in distant fields, and silhouetted against the skyline three Buzzards were seen perched in a tree. As we turned to make our way back we were rewarded with the sight of two Red Kite circling high above us pursued by Crows, and a Kestrel hovering over a field searching for prey. Having once again found our way back to the lane a Chiff Chaff and three Goldcrest were spotted in the bushes. As we neared our starting point a Stoat crossed the lane directly in front of us and quickly disappeared into the undergrowth, adding yet another interesting sighting to our morning.

Together with the more common birds we noted some 25 species as well as several Red Admiral butterflies along the way. We thanked our guide, Clive Hope, for an enjoyable and informative walk and we all agreed this was a worthwhile exercise.