On Saturday 21st March 20 members of Ferring Conservation Group braved a cold northerly wind to help clear up the banks of the River Rife. This coincided with the first ever national ‘Community Clear Up Day’. This ‘national spring clean’ event falls on the first official day of spring and aims to end the blight of litter. It is hoped this initiative will encourage communities to work together to transform local spaces across the country. 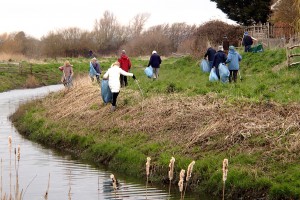 The Group were split into two teams and worked in parallel with each other on opposite sides of the river. At first there did not seem to be too much litter about  but after closer inspection it was realised that small items such as bottle tops, shreds of paper and plastic were wedged in the undergrowth as well as the usual empty crisp packets, drinks cans, bottles, the odd shoe, and surprisingly a few discarded children’s toys. It was disappointing to see how much dog mess was around and it is worth reminding walkers that there are litter and poo bins situated in the Bluebird Café car park.

Jane Hayman, Ferring Conservation Group’s Publicity Officer said ‘It was most gratifying when several walkers took the trouble to stop and thank us for our efforts in helping to maintain a wonderful local environment ’. At the end of the clear up the Group had filled 30 waste sacks with litter!

Later the same day and taking advantage of the very low tides at this time of year, 21 members of the Group met in the Bluebird Café car park for their annual walk out to the Black Rocks outcrop situated off Kingston beach. The late afternoon/early evening walk was led as usual by committee member, Tricia Hall, and those on the walk went equipped with warm clothing, wellington boots and carrying buckets in which to place any specimens found. After about a mile with a few stops on the way to examine some of the seaweeds found on the beach such as Bladderwrack and Serrated Wrack, the rocks were reached and were already well exposed with the rarely seen habitat waiting to be explored. 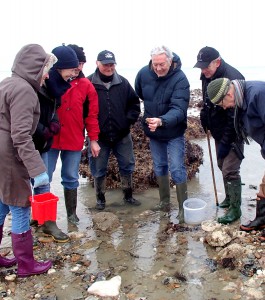 Most people were able to find examples of the beautiful coloured Dahlia Anemone in the rockpools, as well as examples of Breadcrumb Sponge on the rocks themselves and many bright pink coloured forms of lichens or seaweeds covering some of the small rocks. On the animal front, a Squat Lobster was found, as well as a number of small crabs, which were viewed by the members having briefly been captured in various buckets including that belonging to one young girl who had joined the walk and was fascinated by what she had seen. The creatures were then of course returned to where they had come from. By this time, the keen northerly wind was taking its toll, as well as dusk falling and the tide starting to re-cover the rocks, so those present wound their way back to Ferring across the beach.

The rocks are a fascinating marine environment a 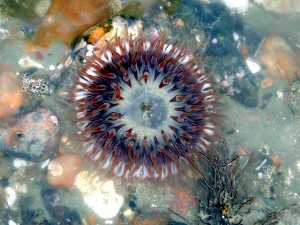 nd well worth responsibly exploring on the few occasions in the year that they are uncovered by the sea. It was a fact that the walk clashed with the England v France Six Nations rugby international, but your rugby loving correspondent recorded the match and was able to watch it on television on his return home having avoided finding out the score.