On a cold and breezy October Sunday morning, a healthy turn out of Ferring Conservation Group members met at the sea end of Sea Lane, Ferring for a guided birdwatching walk around Goring Gap with new member and local bird expert, David 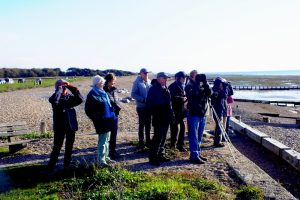 The morning started with a scan of the beach at a number of vantage points on the Greensward, and a good variety of sea and wading birds were seen and identified. There were Oystercatcher, Dunlin, Sanderling, Ringed Plover, Grey Plover, Little Egret and even a number of Knot all on the beach. Off shore, Brent Geese, Cormorant and Wigeon were seen either flying past or on the sea, and flocks of Goldfinches and Starlings were flying inland probably from the Continent, as well as some Siskin and Linnet.

The group then sought sanctuary from the breeze for a while amongst the trees of the Plantation, and a number of woodland birds were either seen or heard there – Robin, Chaffinch and a very obliging Stock Dove, amongst others.

For the final part of the walk, the group moved back out into the open farmland of the Gap, which is such an important roost for many birds, especially at high tides. A number of gulls were seen, including the impressively large Great Black Backed Gull, and at least one Mediterranean Gull, as well as some Skylarks.

However, the highlight of the morning was right at the very end, when in the distance and at some height, our guide spotted, managed to identify and even photographed a rare Hen Harrier bird of prey roughly above the point where we had started the walk. We then watched it fly northwest across Ferring before disappearing out of sight towards the Rife. This was an unusual sighting for our area and capped off an enjoyable morning, which wouldn’t have been possible without the skill and knowledge of David Campbell. The Group is extremely grateful to him.