Around 15 members turned up on a rather hot day to look at birds, flowers and butterflies.We met at the Highdown car park and set off round the top of the gardens, with Tricia Hall in charge of identifying wildlife. 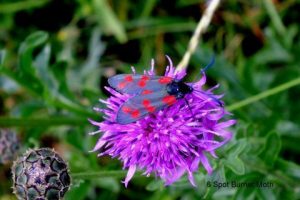 The grass meadow was alive with grasshoppers and many meadow brown butterflies, plus a few burnet moths. Assorted wildflowers were present, and as we reached the western edge, the number of pyramidal orchids semi-hidden in the grass rose, with a good patch behind the commemorative bench at the western edge. We proceeded through a gap to the hill above the covered reservoir, which last year had been a magnificent sight due to thousands of pyramidal orchids, but this year, unfortunately, Southern Waters’ contractors have regularly mown it, and all have been cut. (Next year Graham plans to contact them in advance to remind them of their undert 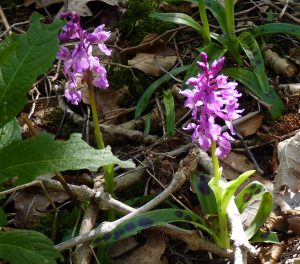 aking to leave the majority of it uncut between May and September).

There were still a number of the orchids around the outer edge of the reservoir, and also clovers, birds’ foot trefoil, eyebright and meadow vetchling within the grasses.

Around the lower edge of the reservoir the plants included agrimony, hemp agrimony, St John’s wort, selfheal, red campion and vervain. Some gatekeeper butterflies were seen as well as meadow browns, common blues and also more 6 spot burnet moths. Chiff chaffs and whitethroats could be heard.

The party split into 2 groups, one going down the track, the other through the rough meadow (the one which has been threatened with eco-yurts) in the hope of seeing some late bee orchids still in flower, but only seed heads could be found. Some pyramidal orchids were visible, and a few seed heads of marsh orchids. Several marbled white butterflies were seen, and some cinnabar moth caterpillars.

The party reunited to go through onto the public meadow above the sports field, and common mallow, meadow cranesbill and scabious were noted. A kestrel, sparrow hawk and red kite were spotted.

The trip was rounded off with a visit to Highdown cafe for refreshments.