Yesterday, a Spoonbill was spotted by Ron and Jan Tutheridge flying over Goring Gap.

A Cuckoo was also seen and many people have reported hearing a Cuckoo in the second half of May, especially over the Rife and further west. Yesterday, also, Clive Hope saw 4 Bottlenose Dolphins following a trawler off Ferring beach and David Campbell saw 6. So keep looking! Peter Dale has reported a few Bee Orchids in the North Lagoon together with Early Marsh Orchids. In the ‘Yurt’ field up McIntyre’s Lane Graham Tuppen has found 18 Bee Orchids.

On the reservoir there are small numbers of Pyramidal Orchids amongst the dry grasses, back after being mown to death for several years. It is very dry on the reservoir but I don’t think it has been mown. Highdown Hill is looking very dry but there are lots of Skylarks and a few Yellowhammers. Although the vegetation is parched, there are extraordinary numbers of Yellow Rattle flowers and the purple Lesser Knapweeds (Hardheads) are coming into flower.

The meadow below Highdown Gardens is covered in an astonishing number of Ox-eye Daisies. There are also many Common Broomrapes, a curious parasitic plant that produces no chlorophyll. It has pale yellow/fawn flowers and stems and no leaves.

The only butterflies of note are many Small Heaths on Highdown and some bright-blue newly-emerged Common Blues. In woodland, Speckled Woods are flitting about. At Patching there are Grizzled Skippers and Dingy Skippers and a few bright red and black Cinnabar Moths.

Finally, on June 1st on Cissbury, I saw a male Northern Wheatear, a very striking black and white bird. This is a very late record for a bird that may be making its way back to Greenland to breed. 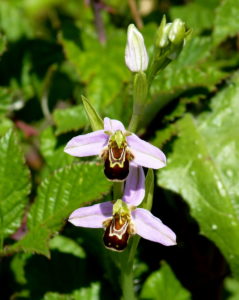 Bee Orchid in a field near Highdown 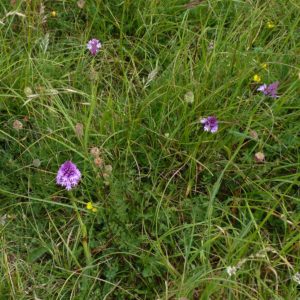 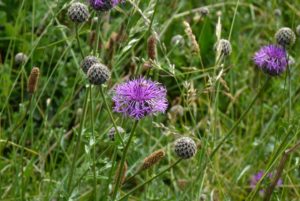 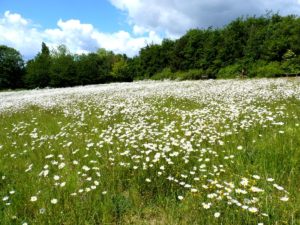 Ox-eye Daisies in meadow below Highdown 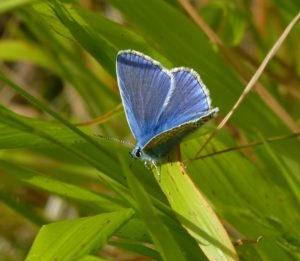 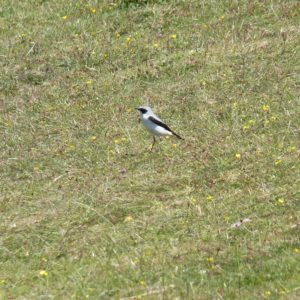