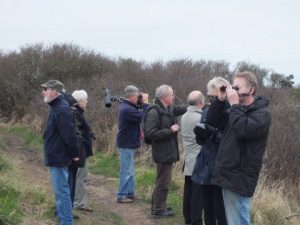 as many species of wild bird as possible. In this peaceful nature reserve we were soon rewarded with a distant sighting of a solitary Spotted Redshank foraging in a reed bed and were then distracted by the calling of around 200 Black tailed Godwits which landed gracefully at the southern edge of the Harbour. Wigeon, Teal, Moorhens, Coots, Tufted Ducks, Shell Ducks, Little Grebes and a Pin Tailed Duck were all evident in the adjacent pools, and we were entertained by 2 Great Crested Grebes displaying their courtship ritual. Mute Swans were also present to the far north. As a White Tailed Bumble Bee sauntered past, giving us a hint of summer to come, we became aware of the mewing of a Buzzard high above us and the plaintive call of a Curlew as it flew just above the reed beds.

We were observed from the north by Herons as they stood like sentries on the top of fence posts and a Cormorant could be seen with its wings outstretched, drying itself in the Spring air. As we walked round to the North West side of the Harbour around 100 Golden Plover could be seen wading in the pools, these birds can be distinguished from the Lapwing by their sharp pointed wings – lapwings have bluntly rounded wings. A less common sighting was the Red Breasted Merganser, these handsome diving ducks are so called because of their long serrated bills, used for catching fish. As the Group headed back for some well-deserved lunch in a local café they were delighted to spot a little Firecrest in a hedge; this jewel of a bird vies with the Goldcrest for the title of the UK’s smallest bird. After lunch, a short visit to Pagham Lagoon resulted in a sighting of Mediterranean Gulls all in breeding plumage. This final sighting resulted in a total of 47 different species of wild birds seen on the day, and proves that this area is a showcase for the wealth of winged wildlife that we are so fortunate to have along the Sussex shoreline. 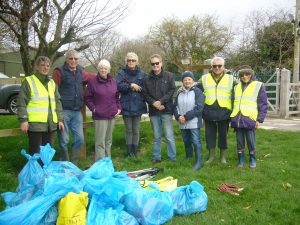 Later that week and on a cloudy Saturday morning and with a traditional south westerly wind, 20 volunteers from Ferring Conservation Group gathered at the Bluebird car park for the annual clean of the banks of the Rife. The group split into two and armed with black bags and litter pickers they worked their way along the east and west banks heading north towards Ferring Country Centre. It is encouraging to report that less litter was found than previous years but it is disappointing that dog fouling is still a big problem in this beautiful area. Dog owners should be aware that Poo Bins are situated at the Bluebird Café car park at the south end and also at the north end by Ferring Country Centre. The usual type of litter was found; chocolate wrappers, beer cans, bottle tops, crisp packets, including a discarded deodorant aerosol, plus many discarded full poo bags.  It is of course an offence to drop litter (including used poo bags) and the term ‘litter’ can include cigarette ends, chewing gum, or any other kind of discarded waste and this can also be a potential hazard to wildlife. Generally, ‘litter’ is considered to be a bag of waste or less; anything larger is usually recorded as fly tipping.

The above event is in addition to the 3 Beach Cleans that the Group carries out each year, this year they are scheduled to take place on Saturday 6th May, Saturday 8th July and Saturday 16th September (this final event of the year is part of the ‘Big Beachwatch Weekend’ and contributes to the nationwide survey run by the Marine Conservation Society).