A cloudless blue sky greeted 14 members of Ferring Conservation Group when they met up with Tricia Hall, their guide for the morning, on the Village Green. Tricia set a challenge and distributed a list of eleven trees which she asked the group to identify during the walk. On the Village Green itself an impressive Oak was the first point of interest. These large deciduous trees grow between 20-40m tall and their smooth and silvery brown bark becomes rugged and deeply fissured with age. On the eastern edge of the Green a pretty Silver Birch tree was admired by the Group. This tree looks attractive in all seasons but its wood is of little commercial value in Britain because the trees do not grow as large as they do in other parts of Europe. A Lime tree was noted on the corner of Rife Way and the flowers of this tree are hermaphrodite, meaning both the male and female reproductive elements are contained within one flower. 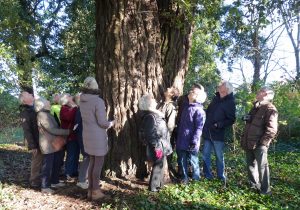 As the Group walked through Little Twitten recreation ground they stopped at a small Field Maple that was recently planted in memory of Joyce Cooper, a founder member of Ferring Conservation Group. Tricia explained that these trees can grow to around 20m and live for up to 350 years. Before leaving the recreation ground the Group marvelled at a majestic Monterey Pine tree situated near to the eastern boundary. This tree is found naturally in the coastal area around Monterey in California but can be found in milder parts of the UK (where it grows faster than in its native habitat). This is the tallest tree in Ferring and can be easily spotted from Highdown Hill. Within the same copse of trees several bird and bat boxes were sighted and Tricia was pleased to inform the Group that these had been occupied during this year’s nesting season. 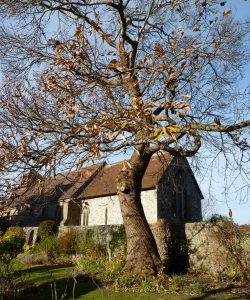 The group progressed south along Sea Lane where an Ash tree stood proud on the grass verge parading its many conspicuous winged fruit or keys, which fall to the ground in winter. Another feature of this common tree at this time of year are the smooth twigs that have distinctively black, velvety leaf buds arranged to face each other.  Looking eastwards from Sea Lane a Sparrow Hawk could be seen circling above the field looking for prey and as the Group proceeded southwards a Horse Chestnut and an attractive Maple stood out amongst other trees along the route. A chirpy Robin and several Magpies were making their voices heard at the edge of the field as the route continued into Beehive Lane where a large Scots Pine tree stood next to the bus stop and a row of Poplars stood erect outside of Scotch Dyke Residential Home.

Taking a short cut through to Little Paddocks the Group savoured the tranquility of this oasis in the heart of Ferring and took pleasure viewing the duck pond and surrounding area where Mallards, Moorhens, Squirrels, and a Woodpecker could all be seen in the vicinity. An elegant Weeping Willow at the water’s edge completed the picture. A resplendent Sweet Chestnut tree greeted the Group at their final destination in Ferring Grange. The bark of this tree in winter is particularly attractive as the older trees have fissures which spiral round the trunk. Chestnut blight has unfortunately arrived in the UK recently which causes cankers and can lead to die-back and death.

Thanking Tricia for a very enjoyable and informative walk, the Group made their way to Kingsley’s Coffee Shop for some well earned refreshment.