On a beautiful sunny, but chilly, morning 18 members of Ferring Conservation Group 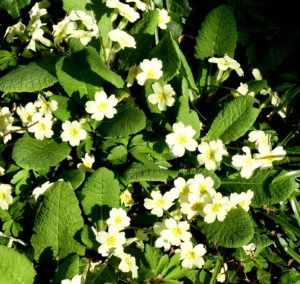 met in France Lane at Patching for a woodland walk. With social distancing rules paramount 3 teams of six people with their knowledgeable guides Tricia Hall, Peter Dale and Graham Tuppen strode out across a newly ploughed field following the public footpath signs to discover the secrets at the heart of a typical English wood. Woods are special and remain the last refuge for many fauna and flora, and a place of seasonal wonder.

The hope was to find carpets of Bluebells and the three groups set off at a gentle pace keeping their eyes peeled and ears tuned for the sights and sounds of this wonderful sanctuary of nature. Carefully following the long established footpaths it was soon noted that although some of the Bluebells were indeed in bloom, many were still in tight bud due to the unusually cld April weather. 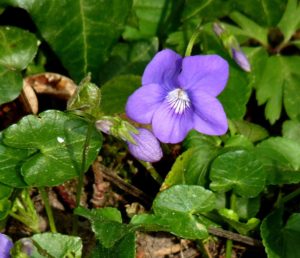 This did not dampen the enthusiasm of the three teams and as they ventured deeper into the wood their reward was soon realised with the green leaves of Dog’s Mercury – this poisonous plant is a good indicator of an ancient woodland. Pretty Wood Anemones were inter-spaced with pale Primroses, delicate Violets and the shade loving perennial, Lords-and-Ladies Lilies. Lesser Celandines added a splash of bright yellow complementing the purple petals of Ground-ivy which is a member of the dead-nettle family and is not closely related to Ivy as its name suggests. Along with Wood Spurge, White Dead Nettle, Red Campion and a few Goldilocks Buttercups they unexpectedly came across beautiful Early Purple Orchids which were apparent in several areas. 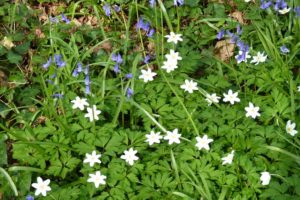 Although they are uncommon each plant consists of 50 rich purple-pink flowers which give off a strong and unpleasant smell once the flowers have been fertilised.

The clouds of snow-white flowers of the Blackthorn edged the wood and these spiny and densely branched trees can grow to the height of around 6-7m and live for up to 100 years. The favourite winter tipple of Sloe Gin is made from its rich, dark inky berries. Numerous bird sound was identified including Chiffchaffs, Great Tits, a Song Thrush and a rather enthusiastic Wren. The pitiful cry of a Buzzard could be heard on the wind although this bird remained unseen. A single 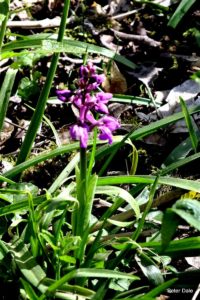 Robin was spotted standing boldly at the side of the footpath and as the Groups made their way back a Comma butterfly was enjoying the warmth from the sun on the branch of a Blackthorn tree, also a Bee Fly had the same idea as it rested by the path. A Brimstone, Peacock and Orange Tip were seen at the edge of the wood. Despite the disappointment of the lack of Bluebells the members thanked their guides and considered the morning an interesting and worthwhile exercise and were grateful to once again take part in an organised Group activity.