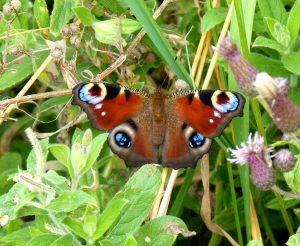 Ferring Conservation Group carried out three surveys this year as part of The Big Butterfly Count. This is the world’s biggest survey of butterflies and last year, during lock-down, 111,628 participants submitted results with a staggering total of 1.4 million individuals counted. Sadly, 2020 was not a good year for many species and because of the hot spring and early summer followed by a wet late summer, many butterfly cycles were over before the counts began. 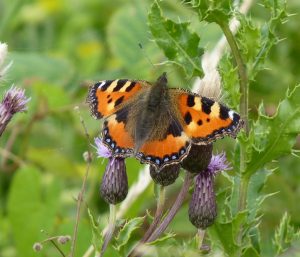 The first two counts were along the Rife. In the North Lagoon 22 individuals were counted in 15 minutes and 9 individual species. It was a dull, sunless day, not ideal for butterfly counting, but 13 Gatekeepers were found.  A beautiful, newly-emerged Peacock was seen and it was delightful to see a Small Tortoiseshell. The latter was once very common along the Rife but is now an unusual sighting. 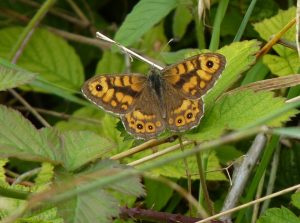 Gatekeepers were spotted. Although no Silver-y, ones of the day-flying moths on the list were sighted, several Shaded Broad-bar and a tiny Mint moth or Small Purple and Gold were counted, and these are common visitors to garden herb beds. A sunny day should have improved the count.

The third count took place on Highdown Hill. There were 10 participants and again the weather was not ideal for this important task. A 15 minute count at the top of the Hill resulted in a few butterflies that were flying around during a search around the vegetation. This time 10 species were recorded, with a total count of 32 individuals. There were lots of Meadow Browns and Gatekeepers but not a single Marbled White. The most unusual butterfly was a Wall which none of the Group had seen in the vicinity before – this is another declining butterfly species. 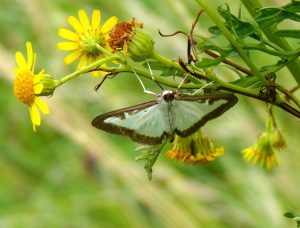 One rather beautiful, silky-looking, white moth with dark-grey wing margins was seen. This, however, is the dreaded Box Tree Moth whose caterpillars have caused such havoc in gardens with formal box hedges. It is an introduced species from SE Asia, entering Britain in 2007.

Other species noted were yellow and black-striped Cinnabar moth caterpillars on ragwort and some members of the Group were lucky enough to catch a glimpse of a Great Green Bush Cricket.