Around 30 members of Ferring Conservation Group met by the beach huts to take part in the last beach clean of 2018. Jenny Gritxi, the event organiser, gathered the Group together and explained that the results would count towards, and be submitted to, the Marine Conservation Society’s annual nationwide beach clean. After the necessary health and safety talk hi-vis jackets, black bags and litter pickers were distributed and Jenny directed the helpers to spread out between the stretch of beach between the Bluebird Café and Sea Lane. 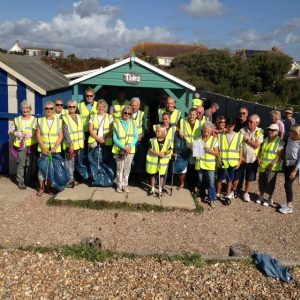 Nine year old Lewis Yates was participating as part of his work towards a Blue Peter Badge in Conservation to add to his collection in other categories.

Although few large items of rubbish were found there was still much evidence of small plastic items, many of which were tucked under foliage, pebbles and rocks. The plastic bag charge seems to have had a significant impact from the evidence of this beach clean. Better wet wipe labelling and an awareness of ‘single use’ plastic items will hopefully improve the situation also going forward.

Jenny remarked that a small toy elephant she had found by the shore was similar to others from a consignment of soft toys that were lost at sea when four shipping containers went overboard in rough seas in 2004.