Members of Ferring Conservation Group met in French Lane, Patching, to look for Bluebells and other wildlife on the beautiful Angmering Park Estate in the heart of the South Downs National Park. Led by Tricia Hall, the Group’s wildlife expert, we headed off across a public footpath in the direction of the woods. As our walk was later in the year than usual we were not expecting to see vast carpets of Blue 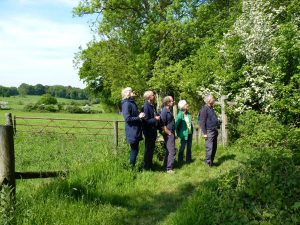 bells but were delighted to find small shady areas where they still stood proud. As we stopped to admire a large Horse Chestnut in bloom Tricia pointed out the pinnate leaves of a young Ash Tree and we also noticed Hazel and Sweet Chestnut trees and several white butterflies. Our walk was made even more enjoyable by a background chorus of bird song which we could identify as Blackbirds, Robins, Chaffinches and Chiffchaffs. 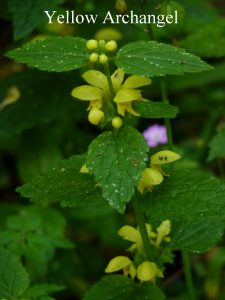 As we headed towards Long Furlong, Red Campion, related to Sea Campion, made an attractive covering along the edge of the footpaths. Woodland Sedge, Ferns, Yellow Archangel nettles and the delicate white flowers of the Sanicle (a member of the carrot family) were also evident. Two Goldilocks Buttercups were found along with White Dead Nettles and the Oxide Daisies were almost in bloom. We were pleased to see Swallows, Skylarks, two Blackcaps, a Green Woodpecker, several Kestrels and also a Buzzard testing the thermals, this time undisturbed by Crows.

Walking alongside a field of Oilseed Rape a Red Kite could be seen high above us and as we took in the view, a glimpse of the sea could be seen in the distance. The pretty, delicate, white flowers of the Hawthorn were at their best; this deciduous tree is native in the UK and made an attractive contrast against the vivid blue sky. Near a patch of the delicate white flowers and fern-like foliage of Cow Parsley we were pleased to see a Holly Blue butterfly and further along the path a Speckled Wood butterfly.

Approaching the end of the path we were brought back to reality as we once again heard the traffic from the main road through Long Furlong, but we were grateful for the opportunity to remind ourselves how fortunate we are to have such glorious countryside on our doorstep.