Clear skies and warm sunshine greeted over forty members of Ferring Conservation Group when they met at Ferring Beach for the second beach clean of the year. Once kitted out with hi-vis jackets, black sacks and litter pickers the group was addressed by Thomas Kearns, at nine years old one of the youngest members of the Group. As this was Thomas’ first beach clean he asked members if they would be willing to fill in questionnaires at the end of the session as he wanted to conduct his own small survey to better understand the degree of the problem we face in tackling litter on the beach. 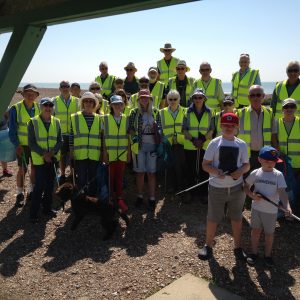 As the members worked across the beach from the Bluebird Café to Sea Lane, including Patterson’s Walk and the area around the beach huts, they were thanked for their efforts by some of the beach users.

The conclusion was that generally the amount of litter collected was less than in previous years but revealed that single-use plastic is still a big problem. After studying the survey questionnaires Thomas said ‘I was surprised at the variety of items found and I will make sure that when my friends visit the beach they take their litter home with them’. The common cause of seabird deaths is marine plastic and leatherback turtles have been found in UK waters with throats tangled with plastic bags that they mistook for jellyfish.

Unfortunately discarded bagged dog faeces were still evident and people seem not to appreciate that this is still regarded in law as litter. In April this year the Government introduced Fixed Penalty Notices for all forms of littering in the UK.