Members of Ferring Conservation Group have been busy recently with more practical work carried out in the village, as well as taking part in a local guided bird walk. 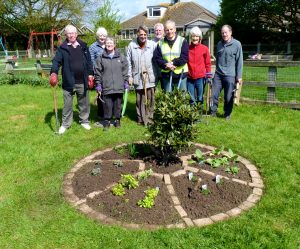 A group of volunteers descended on the Village Green, as part of their series of regular monthly work parties, to re-plant the existing herb bed near to the children’s’ playground. This was planted with a variety of herbs including Borage, Hyssop and Chives among others, which were specifically chosen as being beneficial to pollinators. Following this, the group moved on to the nearby Little Twitten recreation ground, where in agreement with Ferring Cricket Club and Arun District Council, they planted a number of mainly native trees including Silver Birch and Sweet Chestnut near to the path that leads through the park.

Two days later, a decent sized group of members met on the Goring Greensward for guided walk by local bird expert and member, Clive Hope around the Goring Gap. Although the sea and beach were strangely quiet for birds, it wasn’t long before up to four Wheatears were seen on or around fence posts surrounding part of the Gap itself, while four or five recently arrived Swallows were seen swooping low over the crops feeding on the insects there. It reminded us just how important the Gap is for all sorts of wildlife, and that any possible development of even part of it must be strongly resisted.

The walk continued into the woodland of The Plantation where a wide variety of woodland birds were seen and heard. These included Green and Great Spotted Woodpeckers, Song Thrush, Greenfinch, Chaffinch, Blackcap, Great Tit and Blue Tit among others.