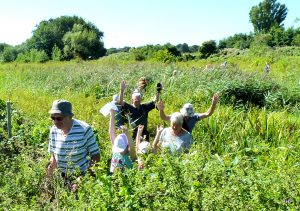 On a beautiful bright summer morning 10 keen eyed children accompanied by 20  enthusiastic adults met at the Bluebird Café car park and headed north along the west bank of the River Rife in search of as many insect species that we could find. Armed with bug nets, bug pots and magnifying glasses we soon spotted a honeybee collecting pollen from a flower with its pollen sacs very full. Then a silver white moth flew past, this moth is seen flying predominantly in the daytime. Unfortunately some of the lagoons beside the River Rife had dried up but two had a little water in them and we soon found a frog hopper, whirligig beetle, and water boatman. Growing around the lagoons were common centaury, watermint, tufted vetch and fleabane wild flowers and we could hear whitethroats chirping in the nearby bushes. We were soon distracted by the distinctive sound of grasshoppers and very soon managed to capture one to take a closer look. Many ladybirds were present too and it was interesting to observe the variation of colours and shapes on their wings. Although the numbers of dragonflies have diminished this year we were fortunate enough to spot several in the lagoon area. 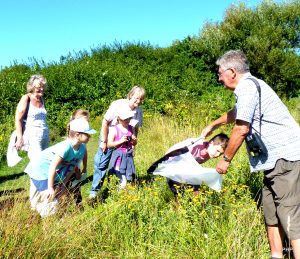 Tricia Hall our Group’s wildlife expert, kindly invited us back to her garden for the children to take part in some pond dipping. Among others a flat worm, pond skaters, mayflower larvae, and a great water boatman were found. The younger members of the group were also delighted to find some tadpoles in one of the ponds. Tricia had placed a moth trap in her garden overnight and the children were thrilled to see a brimstone and burnished brass moth and other colourful examples. After some very welcome refreshment the bug hunters thanked Tricia for her time and hospitality and headed for home. 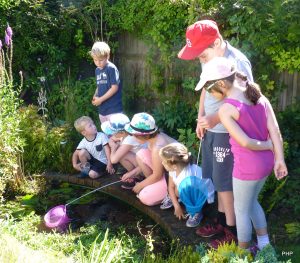