Anybody driving or walking in Sea Lane, Ferring on the last day of July might have wondered why about 20 people were armed with rakes and working hard on the grass verge at the sea end of the road. Well – these were volunteers from Ferring Conservation Group on one of their monthly work parties around the village. 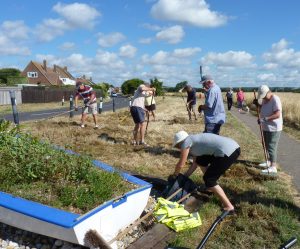 The task this day was to rake up the cut grass and vegetation after the WSCC grass cutters had been there the previous week and had cut down the Summer’s growth in the lower section of the road. The Group in conjunction with Ferring Parish Council are developing this area as a wildflower refuge, and to assist in the process, the cuttings need to be removed to allow the wildflowers to drop seed and hopefully germinate in the next year. If this work isn’t carried out, the seeds can suffocate under a mat of rotting vegetation, which has occurred in previous years, and has led to a reduction in the number and variety of wildflowers including the attractive Salsify.

The proof of the pudding will be next Spring when we hope there will be an improved display in the raked area, and the efforts of our volunteers will have been worth it. We will have to do it all again next year though! 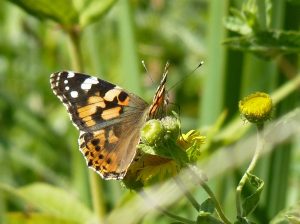 On the following day, a similar sized group of members met on the Ferring Rife to carry out a survey of butterflies around the lagoon area on the west side of the river as part of the national Big Butterfly Count. Although this hot Summer hasn’t been ideal for much of our wildlife, it does seem that butterflies have generally had a good time. The result of our count was a total of 69 butterflies (with 10 different species) in the South Lagoon, and 79 (again with 10 different species) in the North Lagoon.

There were good numbers of the Common Blue, Gatekeeper and Small White, as well as 3 Painted Ladies, and even a rather tatty Silver-Washed Fritillary, which isn’t a common sight away from woodlands. Sadly, there were no Small Tortoiseshells seen, where in the past the Rife area has been a noted stronghold for them. The results were duly forwarded on to the Butterfly Conservation organisation who collate the count nationally.