16 Conservation Group members met at 5.30pm in the Bluebi 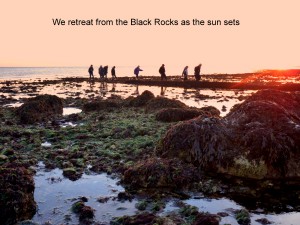 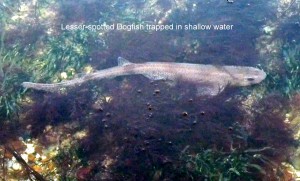 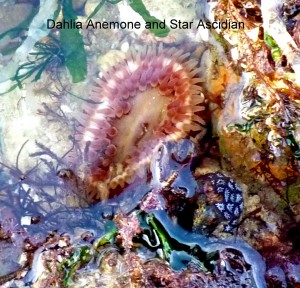 rd cafe car park for a warm and sunny  early evening visit to the Black Rocks at West Kingston. We were taking advantage of the exceptional spring tide following the ‘supermoon’ of the day before. The moon was at its perigee, its shortest distance from the earth, appearing 14 per cent larger and 30 percent brighter than when at its furthest point. This ‘pull’ by the moon had produced a 6.5 metre high tide (or 22 feet, about the height of a house) and a corresponding very low tide which exposed the rocks.

We approached the rocks via the green sward at Kingston Gorse and then picked our way gingerly across the slippery rocks and pebbles, our goal being several hundred metres from the beach. The Black Rocks are lumps of conglomerate and appear dark because they are covered in the brown seaweed, Serrated Wrack.

Another strange animal was a tiny Coat-of-mail Shell or Chiton which is like a limpet with 8 articulated shell plates. It is a primitive mollusc, a ‘missing link’ between segmented worms and snails.

Our most exciting find, however, was a small shark apparently trapped in shallow water as the sea rapidly retreated. We identified it as a Lesser-spotted Dogfish. It was about 80 cm long and seemed a bit surprised to be the centre of attention!

At 7.0pm, the tide was on the turn and the sun was just sinking below the horizon so we retraced our steps with the background of a beautiful sunset and by the time we got back to Ferring the bats were out and a Tawny Owl was heard.

This popular outing was again led by Tricia Hall with Sue Palmer lending a hand with identification.