On a glorious late September morning around 35 members of Ferring Conservation Group met at the beach huts in Ferring to carry out the last scheduled beach clean of 2021. 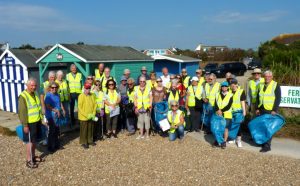 As in previous years this September’s beach clean was conducted as part of the Great British Beach Clean. This national initiative is a week-long citizen science event running from 17th to 26th September, driven by the Marine Conservation Society, with many beach cleans taking place across the UK. During each clean a 100 metre section of the beach is surveyed and all items of litter recorded with the results fed into the International Coastal Clean-up (ICC) initiative. 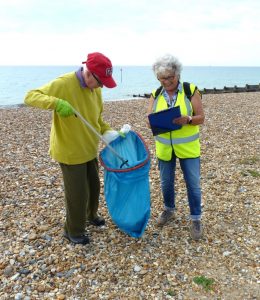 This global event was established in 1986 to encourage volunteers to act as ‘citizen scientists’ by tallying the items of litter found with a view to identifying the sources of marine debris, examining the trends of items and to increase awareness regarding the different threats to marine life. Sadly whales and dolphins have washed up on beaches either already dead or dying due to them ingesting large amounts of plastic. Tragically, in 2019, a young Cuvier beaked whale was spotted in great distress off the coast of the Philippines. It was soon washed up on a beach and shortly afterwards sadly died. To the astonishment of vets carrying out a post-mortem, 88 pounds of plastic was removed from its stomach (including 16 rice sacks on top of other types of plastic bags; plus large tangles of nylon rope). This distressing story demonstrates only too well the race against time we all face for immediate action to be taken worldwide.

Jane Hayman from the Group said “there were relatively few items of litter on Ferring beach due to the recent calm seas and the largest item found was a particularly heavy wooden pallet that became a two-man job to move it along to the collection point. Disappointingly the worst area for litter was to the rear of the beach huts and around the Bluebird café area”.

The 26th UN Climate Change Conference of the Parties (COP26) is taking place in Glasgow from 31st October to 12th November 2021.  Leading up to this crucial conference a national initiative is taking place and from 18th to 26th September over 2000 communities across the country are joining together for the ‘Great Big Green Week’. Events are taking place in many towns and villages involving local groups highlighting how people can take action to tackle climate change and protect our wildlife and green spaces on a local and personal level, with a view to encouraging others to become involved too. The events will range from climate cafés, community stalls, art installations, concerts and many more all with the aim of putting pressure on the UK Government to up its game on climate change. Ferring Conservation Group have provided an interesting and thought provoking display which can be seen in Ferring Library until Friday 24th September. Please do go along and take a look at it and even put some of the suggested actions into practice.