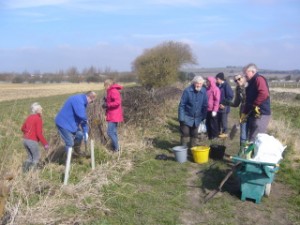 On Tuesday 15th March, a band of volunteers from Ferring Conservation Group gathered on the banks of Ferring Rife for a tree planting morning. Over 100 native trees had been obtained by the Group from the Woodland Trust to add to those trees already planted in the area over the last five years. The long term plan is to provide an effective wildlife corridor here, and the varieties of trees planted – Downy Birch, Rowan, Hazel, Hawthorn, Holly and Crab Apple – will result in a diverse habitat. These will be well suited to the open and exposed location.

Later, in conjunction with the nearby Ferring Country Centre, the workers went on to plant a large number of Willow whips around the boundary of some of their horse paddocks stretching out towards the East Preston Gap. Again, this will provide a feature which will develop over  the years, it will attract wildlife and will act as a windbreak. After the planting was completed, most of the work party visited the cafe at the Country Centre for a hot drink and something to eat.

Group Chairman David Bettiss,who organised the morning, said, “This was another successful morning by Ferring Conservation Group to generally improve the area for wildlife and as a place for people to visit as the trees grow. I want to thank our volunteer members who have turned out again to help. We were very lucky though to have a bright, sunny but chilly day. The rewards of our efforts on the day and from previous work days will be seen over the years to come.”