In the latest of the series of local natural history visits, a group of members ventured into Patching Woods near to the village of Patching in a hunt for bluebells (and other wild plants) and to listen for seasonal birdsong. 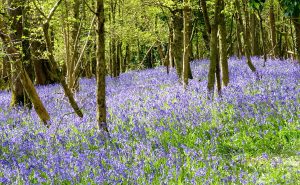 Straight away on entering the woods, they were greeted by an amazing vista of blue from the native bluebells which stretched as far as the eye could see, and all those on the trip led by Group committee member, Tricia Hall, agreed it was one of the best years they could remember for these iconic plants – probably due to the wet Winter and cool Spring weather. Not only bluebells were seen in the woods, but also the first showing of Wood Anemones and the first sighting there of some Early Purple Orchids spotted by an eagle eyed member. Some of the other plants seen in the woods or nearby were Dog’s Mercury, Ladies Smock, Greater Stitchwort, Wood Spurge, Ground Ivy and Goldilocks Buttercups amongst many others. 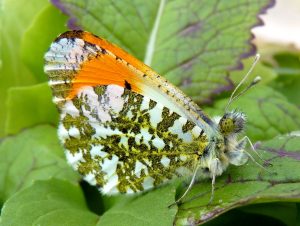 Due to the cool and unsettled weather, the birds and butterflies were a bit on the quiet side but Peacock and Orange Tip butterflies were seen in a couple of locations with the latter doing a fly past right by the group. 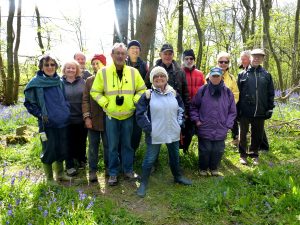 On the bird front, Chaffinch, Wren, Robin, Chiffchaff, Great Tit and Blue Tit were seen or heard in the woods, while a Buzzard was heard “mewing” overhead nearby with one being spotted sitting in a tree branch on the woodland fringe. Once out of the woods and into open downland, there were very good sightings of Yellowhammer and Whitethroat, as well as Skylarks singing overhead. The attention of the group was then drawn to the towering shower clouds approaching and so there was a hasty retreat to the parked cars. By the time, sanctuary was sought at the nearby pub for lunch and a drink, a heavy snow shower had arrived – not bad for the end of April!