Despite sub-zero temperatures 21 keen members of Ferring Conservation Group met at Warnham Nature Reserve for a guided tour of this beautiful and precious resource on the outskirts of Horsham. Their guide for the morning was Clive Hall, a knowledgeable local bird expert and longstanding member of the Group. He was assisted by the Group’s wildlife expert Tricia Hall and her daughter Jackie, who is a volunteer at

Warnham. Since the Group’s last visit some years ago there have been many welcome additions by way of a newly built Visitor Centre, including a Café with inside and outside seating, a Discovery Hub and Wildlife Garden plus several new Hides. This 92 acre site boasts a serene 17 acre Millpond, complete with reedbeds and nesting islands and edged with a dominant boundary of lush vegetation including large areas of Great Reed Mace, often known as ‘Bulrush’. This provides ideal camouflage for the vast array of water birds that are attracted to this proven wildlife haven. This valuable oasis will be even more treasured in the years to come now that the countryside surrounding this popular town is under threat of massive development.

As members stood admiring the beauty and tranquillity of the Millpond many Black Headed gulls, and some young Herring Gulls could be seen along with 2 Mute swans, and a pretty Common Pochard duck – this medium sized, plump, diving duck feeds on plant seeds, water weed, snails and other aquatic invertebrates. The male is grey with a 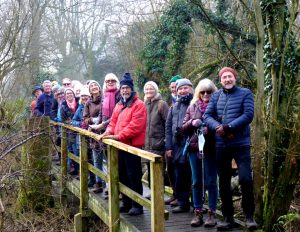 chestnut head and a black chest and rear end, while the female is a darker, duller grey-brown. The UK is an important winter destination for the Pochard and although it is a rare nesting bird it can be found in large numbers on lakes, reservoirs, flooded gravel pits and estuaries. Several Cormorants could be seen perched high in trees on the far side of the Millpond, silhouetted against the pale grey clouded sky, while a solitary Tufted duck circled overhead.

A short walk took members to the first of the new hides that overlooks a clearing in a wooded area where numerous bird feeders had been sited that had attracted many species of birds. Several male Chaffinches, Blue Tits, a solitary Reed Bunting, one Goldfinch, an exquisite Nuthatch, one Robin, a Magpie and a native Blackbird were all 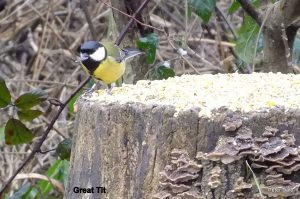 greedily consuming the abundant provisions. A rather plump Grey Squirrel arrived to tentatively eat up the seed that had fallen to the ground from the over enthusiastic antics of the small birds. It appears to be the perfect ‘no waste’ society, which we could all learn from.

Adjacent to the path leading to the second hide, a small herd of Hebridean sheep were quietly grazing in a field. These short-tailed, black sheep are a small and hardy breed originally from Scotland that are helping to manage the coarse rough grass and are proving effective at scrub control.  A welcome and contrasting attraction at Warnham.

outshining the rather drab colouring of the much larger female. A cheeky Moorhen joined the scene as the familiar sound of a Greater Spotted Woodpecker was first heard and then sighted high in a nearby tree.

As members continued along the boardwalk they came across an eye-catching structure called ‘The Bat Bothy’ – one of two sculptures sited throughout the Reserve. Inspiration for this was taken from the tradition of placing stone structures in the landscape as basic shelters. The version at Warnham has been created as a home for bats with small entrances leading to an internal ‘cave’ where bats can gather and return to as dawn breaks. Jane Hayman from the Group said “these sculptures not only provide a valuable and practical function they are also pleasing to the eye and interesting structures that also aim to educate visitors”. 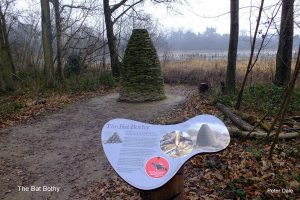 on the trail. They couldn’t believe their luck! Also a keen member spotted 2 Jackdaws huddled together against the bitter weather high up in a tall tree.

After heartfelt thanks were conveyed to the guides and the purchase of a hot drink from the splendid new café, members made their way to the seated area to thaw out with the additional help of an attractive and functional wood burning stove. Once fingers and toes had warmed up members shared the view that Warnham Nature Reserve provided a wonderful place to observe wildlife greatly enhanced by the recent, well designed, improvements.