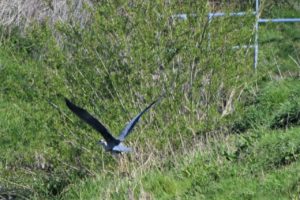 distanced teams of 6, strolled leisurely along the west bank of the Rife heading north. The early start soon paid dividends as the keen ears of the group’s leaders identified a Reed Warbler which was also briefly seen by a few members. Also Whitethroats, Chiffchaffs, a Willow Warbler, a Cetti’s Warbler, and Dunnocks (sometimes known as Hedge Sparrows) could all be heard in the vicinity. Further along the route Starlings were seen interestingly using the hole in a mature Aspen tree in which to build their nest.

Many wild flowers and plants were noted adjacent to the banks including Wild Garlic, 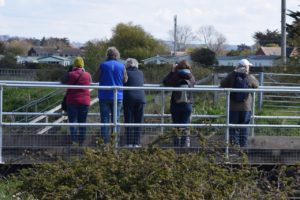 White Dead Nettles, Hogweed, Ladies Smock (sometimes known as Cuckooflower) and Ground Ivy, but the yellow flowers of the Colts Foot had already gone to seed.

The white lacy flowers of the Blackthorn were in abundance but the Hawthorn trees were still in bud. It was encouraging to see that many varieties of trees including Willow, Rowan, Hazel, English Oaks and  Black Poplars that had been planted by volunteers 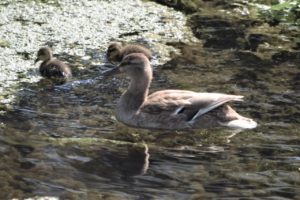 from the Group in years gone by were largely thriving and doing their bit to act as efficient wind breaks along both sides of the Rife. However, it was alarming to see that the prolonged lack of rain had caused the water levels in the Lagoon areas to be unseasonably low, with no evidence of tadpoles. With eyes raised at the sound of a nearby Green Woodpecker it was a delight to see 2 Little Egrets resting in a tree unperturbed by people passing by. Magpies were plentiful and a nest was spotted at the top of Willow tree precariously 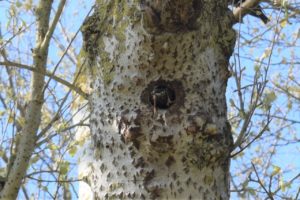 being blown about by the cold north wind.

One of the highlights of the morning was the sight of a female Mallard duck jauntily swimming along in the water followed by her 13 (yes, 13!) tiny ducklings. As the teams neared the footbridge a solitary Heron was seen wading in the shallow water before taking flight towards the Kingston Gorse area – it amazed the teams at how large these distinctive birds are.

On a fine day, and at water levels unusually low for this time of year, the Rife appears to be calm and unproblematic, but this wasn’t always the case – prior to the 1980’s it was comparatively shallower and narrower. The construction of the West Durrington estate with the consequence of extra surface run off, and the combination of torrential rain in the autumn of 1980 together with a high tide, the Rife overflowed its banks, flooding many houses in both North and South Ferring of up to 2 feet or more. The same problem occurred 3 weeks later and this prompted Southern Water (who were responsible for maintaining the Rife at that time) to take preventative action. In 1982 a scheme was started to widen the watercourse and raise the banks on both sides. The bank on the west side was left slightly lower than the east bank to allow any excess water to flow into two lagoons that had been created for this purpose. 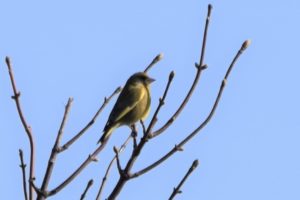 way in addition to the evidence of many flourishing trees, wild flowers and plants. It was reassuring to find that this important area is still thriving and providing an important and valuable sanctuary for local wildlife. Still in their teams of 6, members enjoyed some refreshments at the outside seating area of the impressive newly built café at Ferring Country Centre.