24 members met by the beach huts for an extra beach clean following stormy weather with high tides. A lot of wood had been deposited on the beach togather with plastic buoys and old lobster pots. It was extremely windy making it difficult to pick up tiny bits of paper and plastic so we concentrated on the larger objects. Sue and Tony Palmer did sterling service dragging the trolley which was piled high with rubbish.

Several of the plastic buoys were covered in Goose Barnacles, strange relatives of the 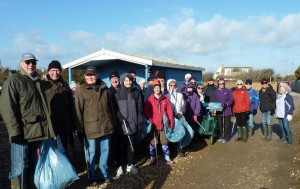 prawn and crab family, the Crustacea. They start life as little shrimp-like creatures which then attach themselves to floating objects like wood, plastic or the bottoms of boats. Here they develop into stationary filter-feeders with white shiny plates covering their bodies which hang from a stalk. We even found a plastic water bottle with Goose Barnacles growing out of it, looking like a strange bunch of flowers! In fact the bottle would have been floating upsidedown with the Barnacles hanging underneath.

Several members also took part in an improptu ‘treasure hunt’ to find 12 objects of animal or vegetable origin which had been stranded on the beach. 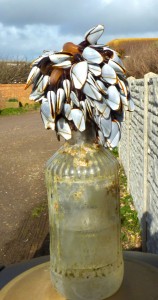 Tricia Hall, on behalf of the committee, thanked Jenny Grixti and Sue Palmer for organising the event and she thanked so many  members for turning out on such a wild and windy day. Four more beach cleans are planned for the summer.