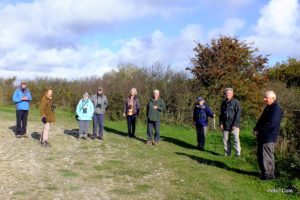 members met at Nepcote Green and divided into two groups and proceeded at a leisurely pace up the Gallops and onto the path which runs between Cissbury and Chanctonbury. They later returned along a short section of the Monarch’s Way.

It was a bit late for migrants, but groups of Skylarks, Meadow Pipits,

Common and Herring Gulls were evident and the only raptors were two Kestrels. In a muddy pool at the top, Yellowhammers and a single Chaffinch were bathing and drinking. There were groups of Linnets and Goldfinches, brief views of a Song Thrush and a Chiffchaff and excellent views of a Stonechat. A total of 25 birds were seen and heard.

On the Gallops a surprising number of late-flowering plants were noted including: 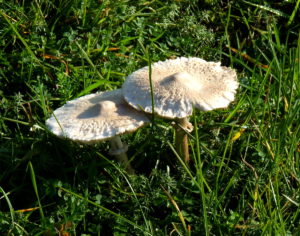 Common Toadflax, Harebell, Knapweed and Meadow Sweet. There were a few edible mushrooms and some rather beautiful Parasols, Macrolepiota procera.