On a beautiful sunny day, 11 members met in the car park and divided into two socially 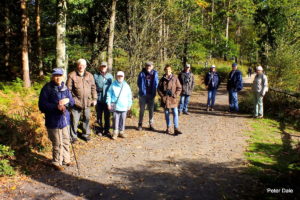 distancing bubbles. Our aim was to look at various trees and fungi as we went on our circular walk through the woods. Our first stop was to admire the outstanding views across the heath to the South Downs. The dominant tree is the Scots Pine and we examined the leaves which are adapted as paired, waxy, needles to conserve water and allow snow to fall off. Second stop wasan area of Sweet Chestnut coppice. These trees came to Britain with the Romans, providing valuable food and timber and later the trees were coppiced to provide long poles 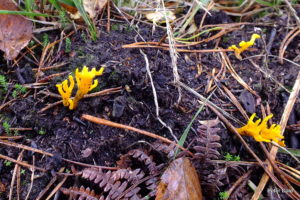 needed to support hops for the brewing industry.

Hops are now strung on wires but coppiced chestnut poles are still used for fencing.

We also examined a large Larch, a deciduous conifer whose needles sprout in little groups and drop in winter. On its branches were small cones and lots of foliose lichens, a good indicator of a non-polluted environment. The lichens are a symbiotic association between a fungus and an alga. Other trees were mature Oaks, Beech, Holly and masses of young Silver Birches. 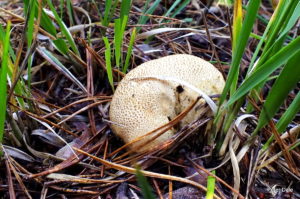 Birds were few. We heard Green Woodpecker and Raven and saw and heard Buzzard. We noted two different heathers: Calluna vulgaris or Ling which flowers in the summer and Erica tetralix or Cross-leaved Heath in the damper areas, some of which was still in flower.

Although the proposed fungal trail had not yet been laid out we enjoyed searching for our own fungi which included bracket fungi like Turkey Tail and Birch Polypore, a yellow Stagshorn, a puffball, one of the Boletes (with pores, not gills) the aptly-named King Alfred’s Cakes and a number of unidentified ‘toadstools’.

The fungal trail has now been opened and should be worth a visit. The RSPB shop is open Wednesday to Sunday and you can buy coffee.