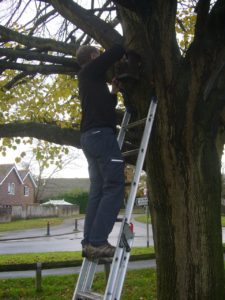 our annual survey and cleaning of the various bird nest boxes around the public places in the village. These are situated at Little Twitten, the Village Green and Glebelands, as well as the Ferring Country Centre. It was really pleasing to report that all bar one of the boxes had been used by birds during the past Summer, with nests present in them.

The nests were made up of different materials, with the most common being mosses and feathers, while on the Village Green, one had a large amount of hair, with the Country Centre ones unsurprisingly having a lot of straw and hay present. In one box, there were a number of 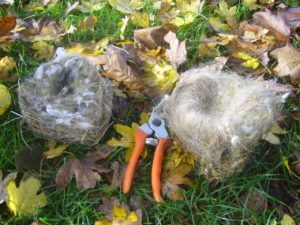 abandoned eggs (probably Blue Tits), in one a dead Great Tit, in another a couple of very young dead Blue Tits, and finally one had a large circular hole drilled into the front of the box right next to the official hole which had been protected by a metal plate. This was presumably done by a Woodpecker, and could even have been used by them as their own nest.

broods, and even those above would have raised some chicks. Anyway all of them are now clean and ready to welcome new occupants in the Spring of 2021.